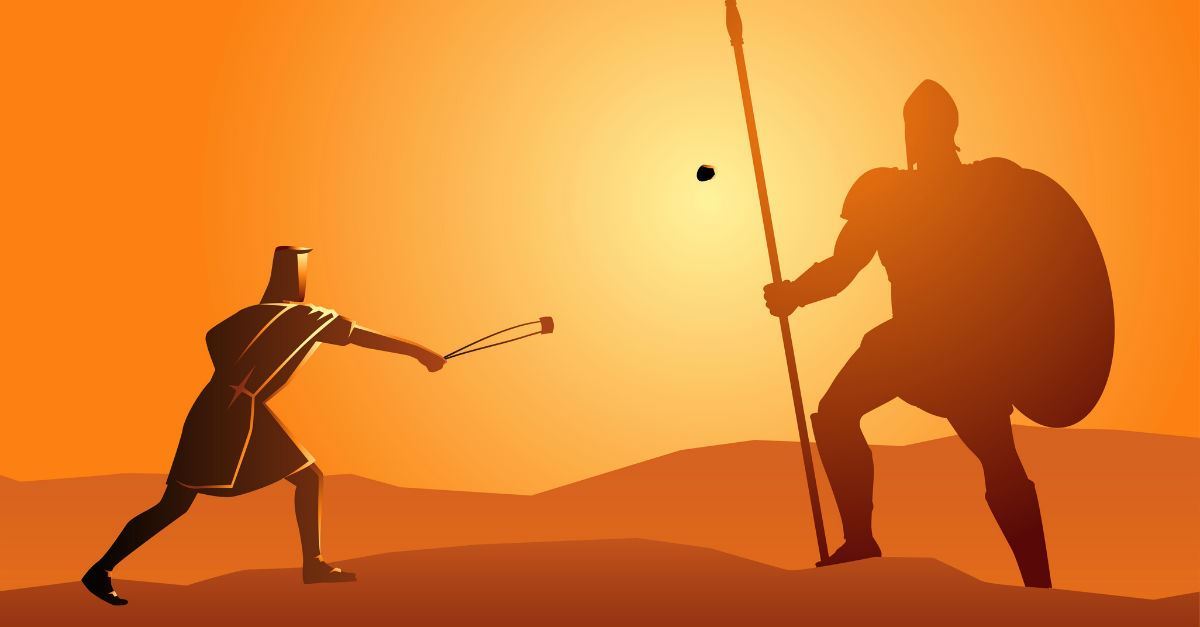 There are two ways to read your Bible.

One of of the most common mistakes Bible-readers make is inserting themselves into the story, in a way that muddies the real meaning of the text and obscures the picture of Jesus being painted by the words of Scripture.

The goal is any Bible-reader should be to read Jesus out of the text while fighting the inclination to read yourself into the text.

No story in the Bible is as frequently subjected to this woefully flawed bit of biblical interpretation as the story of David and Goliath. The story is told typically as a classic underdog story about “overcoming the giants in your life”. Countless sermons have been preached and numerous books have been written that insert us as the main character in the story, which is of course, a young David who valiantly volunteers to face the Giant that everyone else is terrified of. You get the idea.

Recently, I preached this story as the church I serve as Lead Pastor and throughout my studies I was shocked to learn just how little I actually knew about this story. The truth is, though I had heard this story countless times throughout the entirety of my life, I discovered that I had actually been missing the point of the story completely mainly because I had always missed this one simple truth:

David was not the underdog in the story.

This story is told all over the world as a story about overcoming an enemy against insurmountable odds. Weakness triumphing over strength. The phrase “David and Goliath” is a term used to describe a MASSIVE underdog scenario. But is it?

In order to see David and Goliath as a classic underdog story one must see the young shepherd boy and the imposing Giant facing off in that valley and make the judgement that GOLIATH is the more impressive of the two men.

This assessment actually reveals to us what impresses us. Sure, externally Goliath is the more physically imposing of the two men. But can all strength be assessed on a purely superficial level? After all, it is David and not Goliath who comes into battle “in the name of the Lord of hosts”. It is David who comes empowered by the presence of God Himself.

When I grasped that I was impressed by the wrong person standing in that valley it changed EVERYTHING about what I have always believed about this story. EVERYTHING. The key verse that unlocked this story for me was actually a verse back in chapter 16 when David was anointed as King by Samuel. David’s older brothers, who were taller and more impressive, were paraded before Samuel and God rejected them all. God told Samuel “You are NOT seeing strength the way I SEE strength!”

When we view the story of David and Goliath through the lenses of 1 Samuel 16:7 we cannot help but ask: Who’s the REAL underdog here? The Faith-filled, Holy Spirit-Empowered Shepherd or the Faith-less, Spirit-less, Physically imposing Enemy of God’s people?

You see, the truth is, this isn’t a story about an underdog triumphing over an impressive Enemy. This is the story of an Anointed King, empowered by the very presence of All-mighty God defeating a weaker Enemy He was always destined to defeat.